The Most Helpful Warning About Marriage My Mom Gave Me 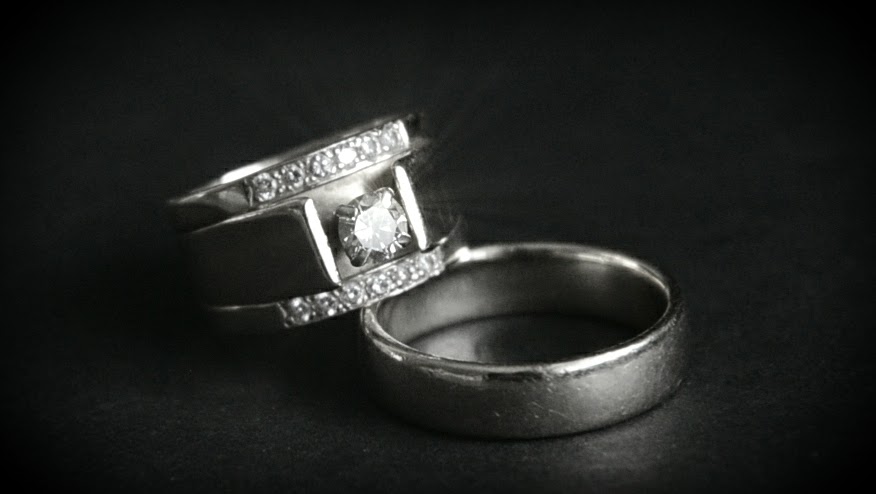 It happened as I was working on wedding preparations, my Mom blurted out, “One day your going to wake up and think, he’s a jerk!”  I stared at her in disbelief, not sure what to say. It was unthinkable! Never, I thought!! Sure we will have disagreements, but I will never feel like he is a jerk! My Mom stared back from where she was ironing the laundry, she had that wide eyed, astonished look of “did I just say that out loud?”
It was the best warning about marriage my Mom ever gave me. I believe she was deeply concerned about how heartbroken I would be the day it happened. It would come to be. She knew it would. It happens in the best of marriages. I believe it was a statement driven by my Mom’s fear that I was wearing rose coloured glasses and was deeply entrenched in fairy tale land.  My Mom knew me well; as much as she tried to prepare me for a hard world, I was a dreamer. This statement was the right thing to say.
Craig and I were both youngest children, each with one older sibling. We were peace keepers by nature, collaborative and non-argumentative.  We had dated for almost two years before we married and we had not fought once. Then, it took a year  of marriage for us to have our first fight. Truly, three years and no fight. You are not going to believe it, but out first fight was about politics. It took so long, neither of us made it to the polls. For real, I am not kidding. I was so steaming mad!! And there it was, a crack in my perfect man and “jerk” fell out.  I know some of you are in full on shock, knowing him, it is hard to believe.
Had my Mother not wisely warned me, I believe it would have hit me harder. Her words immediately came to mind and my first reaction was, “It’s OK, this is normal, my Mom told me about this!”  I was a little surprised at the intensity of frustration, hurt and anger I was feeling. I loved him madly, how could I feel so much anger towards him? How could he be so thoughtless? So selfish? So human???
Once the crack is there and the jerk is exposed,  it can go one of two ways. You can become overwhelmed by their imperfections and allow contempt for them to build in your heart.  Or you can recognize it is there, forgive and focus on their strengths.
Let’s be honest, the first option is the natural unchecked response of human nature. We are all at risk of this. Fortunately, having lived in a family before, we may have a few skills on hand to avoid this trap.
As I processed my feelings,  I realized that if I was thinking “Oh no, there is a part of him that is jerk!”  He was likely having the same experience in reverse. I was probably being thoughtless, selfish and human too. I did not relish the thought of behaving in ways that annoyed, bothered, or hurt Craig. If I was honest with myself, I had a jerk side too. I know, again,  hard to believe but true! I hope you can feel the facetious tone of that last sentence.

Now, what to do with these intense emotions??

As I tried to talk with Craig, it soon became apparent that the intensity of my problem solving was overwhelming him. I know you will be proud of my deductive abilities in this. My intentions were to get the issues out, work them through, forgive each other and move on. As I tried to do this, Craig stopped talking, got that “deer caught in the headlights” look and escaped to the study. I followed him, he said nothing and proceeded to escape to the kitchen. It was a small 800 sq ft house. We are talking postage stamp. Small, not a lot of places to run. No matter where he went I followed him, still talking, until he finally said in desperation ” I just need time to think about it.” Here is where my deductive powers really sparkle. I realized that my emotional intensity was shutting him down. Thank you! I thought that was rather perceptive myself!

This was scary for me, in my family, we worked through problems. Not perfectly, sometimes intensely, but never without resolution. Without the words “I am sorry” and “I forgive you” being said, I felt like I was on the edge of a cliff, unsure of my future.  Having to wait while he processed his thoughts was a torturous, terrifying time of uncertainty for me.

We began the journey of finding a balance that would work for both of us.

I learned to pray about when to bring something up, stay as emotionally neutral as possible, and give Craig the space to think it through.  I learned not to panic if I needed to wait for resolution until after some time away from the issue.

Craig learned to stick it out, verbalize his side, and let me know when we would come back to it if he needed time to think. He also learned my need for resolution through apology and forgiveness. We were so very imperfect at this to begin with, we kept trying and in time developed a conflict style that worked for both of us.

If we are starting to view the one we love critically, we struggle with letting the little things go. Everything becomes a battle. Even the little irritants become big.  This kind of thinking is a red flag. It is a warning that something needs to change in how we view them.

Craig is still my perfect guy, even if there is a crack that let’s “jerk” out now and then. That is because of a choice I made regarding how I would think about him. I knew that what I thought about him would directly impact how I felt about him.
1. When Craig does something that I find frustrating, I try to think the best about him. When he leaves his half empty cups of coffee around the house, instead of thinking “How lazy, I can’t believe he left that there for me to pick up!” I try to give him the benefit of the doubt, “He must have a lot on his mind”.  Assuming the best about him is fair, it protects his character and keeps me from a nasty thought cycle.
2. When something frustrates me I ask myself, how much is it costing me? Is it really worth bringing up? Is it better to just let it go and extend grace in that area? I actually learned this from Craig. If I am going to out some of his bad habits, it is only fair if I share some of mine. It was how he reasoned not telling me that my neglecting to put the lid on the toothpaste bothered him. I didn’t even know I did that! I had lived in the dorm where the lid had to go back on, stuff just couldn’t lie around. Once I knew and realized it bothered him, I started making sure I put the cap back on.
Clearly big issues need to be worked through. I still think this principle can be effectively applied. Is there anything more important than my husband?  Is it something I am going to cling to tighter than I cling to him?
3. When I get mad or my kids hear me say his name in that tone of utter frustration, I quickly think about all the things he does that are incredible. I start reminding myself about all the things he does right. It is important to never let his imperfections become bigger than his strengths. If my kids have heard me speak his name in frustration, I try to do that out loud. I probably need to be more diligent in making sure that they hear me speak those things out loud.
4. It is important to verbally express appreciation for the things he does and how he loves me well. It makes me more aware of everything he does. I think the more I express my gratefulness, the more it increases.
5. I try not to hold past mistakes over him. If we have worked something through and I have extended forgiveness, I refuse to bring it up again to prove a point. It is unhealthy and damaging to the relationship to keep a list of everything they have done wrong.  It steals away respect and love
6. I remember that I do things that drive him crazy too. Craig extends a lot of grace to me in my failings and I want to do the same in return. It comes down to loving him the way I want to be loved. If I expect it, I better choose to live it out.
7. I have decided to always view him as my perfect guy. Nothing will change that for me, not even his imperfections. I have chosen to love him for as long as we get to be on this earth. He is my perfect guy, the only one I want. That is my choice, that is how I will view him for as long as I am allowed the pleasure. That is just how it is!

The beauty is that Craig offers me these same things. That is what makes our marriage so great.

So when all of a sudden the day arrives and the unthinkable happens, remember, it is a part of marriage. Others experience it too. When the one you love slips up and reveals that they are human, it isn’t the beginning of a disappointing future.  You have a choice. What you do with those feelings and the behaviours you choose will determine if your marriage is going to be great!